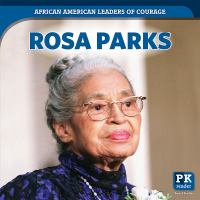 Book
Rosa Parks is best known as the woman who helped start the Montgomery bus boycott of 1955 to 1956. However, her life story extends far beyond her defiance on that Alabama bus in 1955. Parks was an activist for change and a supporter of equal rights. This book tells her story, both before and after her actions on the bus, and stresses her importance in American history to this day. Using manageable language and vivid photographs, this beginner biography introduces young readers to a notable and important human being.