After dark : poems about nocturnal animals 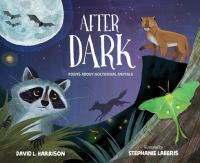 "When the sun goes down, many animals come out. Crickets chirp their crickety song hoping to attract a mate. Cougars bury their leftovers for later, leaving few clues for others to follow. Armadillos emerge from their dens to dig for worms, leaving holes in the lawns they disturb. This collection of poetry from acclaimed children's author and poet David L. Harrison explores the lives of animals who are awake after dark."--Amazon.com.