Bringing back the wolves : how a predator restored an ecosystem 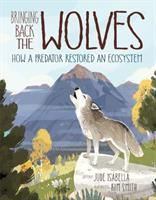 Book
"In 1995, the gray wolf was reintroduced to Yellowstone National Park after a seventy-year absence. All these years later, we can clearly see the cascading effects this has had on the park's ecosystem. This is a spectacular example of a trophic cascade, the term used when an important member of an ecosystem goes missing and many other living things are indirectly affected, causing a chain reaction of events. In the case of the reintroduced wolves of Yellowstone, the chain reaction went as far as changing the behavior of waterways and the surrounding geology. This book is a fascinating exploration of the transformations that have taken place in Yellowstone National Park since the wolves returned -- including the monumental changes to the landscape and to all the animals that live there -- clearly told through lively narrative and food web infographics."--