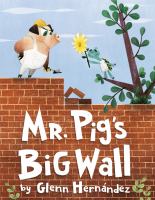 Mr. Pig only wants to tend to his garden but his neighbor, Little Tortoise, wants him to play. Mr Pig resorts to extreme measures to ensure his privacy but it dosen't work out like he planned...