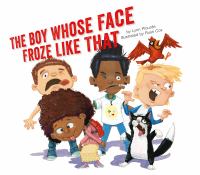 Book
"Wendell is a good kid-he wouldn't make faces if his parents told him not to, even if all his friends were making faces. But what harm would it do to make a funny face in the mirror if no one could see him? A lot of harm! Unlucky Wendell becomes the first kid in history whose face freezes in place! Wendell, his parents, and his dog try everything to unfreeze his face, but nothing works. Will Wendell ever get his face unfrozen? And what will his family think of him if his face is stuck like that forever? Find out in this charming, silly, and ultimately heartfelt story by dynamic duo Lynn Plourde and Russ Cox."--provided by publisher.