The bear in my family 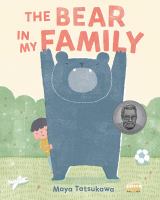 Book
"It's not easy living with a bear, but one little boy learns that sometimes, a bear in the family can end up to be the best thing in the world"--