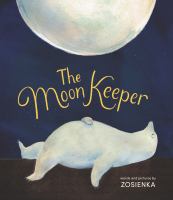 Emile has a new job as moon keeper. He spends his evenings making sure the moon has everything it needs to shine its light over the night creatures. Night after night he keeps watch over the moon--clearing away the clouds and telling the fruit bats to move along when they play too close. Emile finds the moon nice to talk to in the stillness of the night. But what happens when the moon starts to change and slowly disappears?