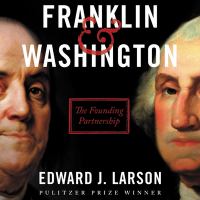 Theirs was a three-decade-long bond that would help forge the United States. Vastly different men, Benjamin Franklin, an abolitionist freethinker from the urban north, and George Washington, a slavehold?ing general from the agrarian south, were the indispensable authors of American independence and the two key partners in the attempt to craft a more perfect union at the Constitutional Convention, held in Franklin's Philadelphia and presided over by Washington. Yet their teamwork has been little remarked upon in the centuries since.