Jumanji. The next level 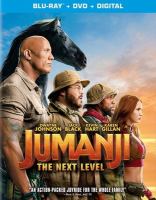 Blu-ray
Scheduled release date: March 17, 2020.
With the gang spread across the country (and beyond) at college, Spencer is back to feeling out of place, even when he returns home over winter break. Desperate to escape his grandfather who is sharing his room, and to feel confident again, he attempts to fix the broken Jumanji video game, giving his friends no choice but to level up and return to rescue him.