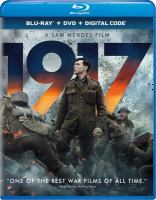 Blu-ray
Scheduled release date: March 24, 2020.
At the height of the First World War, two young British soldiers, Schofield and Blake, are given a seemingly impossible mission. In a race against time, they must cross enemy territory and deliver a message that will stop a deadly attack on hundreds of soldiers.
"1917 is a modern war classic and one of the best movies of the year."--New York Post.
"Legendary cinematographer Roger Deakins (No Country for Old Men, Fargo, Blade Runner 2049) effectively drops the viewer in the center of the story and compels them to stay there, fully immersed in every muddy step, hunger pang, and rifle click."--Entertainment Weekly.