Children of virtue and vengeance Legacy of orisha series, book 2. 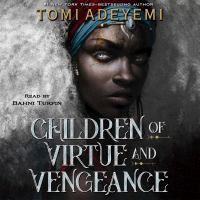 Available as a download from OWWL2go with a valid OWWL borrower card.
*The spectacular sequel to Audie Award Audiobook of the Year Children of Blood and Bone * A GOOD MORNING AMERICA BOOK CLUB PICK "Bhani Turpin exquisitely narrates the second book in this fantasy series, Legacy of Or&#239;sha. Her steady pace and West African accent draw us into the story of Z&#233;lie, a Maji warrior, and Princess Amari&amp;#8212;both of whom fight against a monarchy that threatens to destroy the people of Or&#239;sha...A riveting audiobook!" &amp;#8212; AudioFile Magazine, Earphones Award winner After battling the impossible, Z&#233;lie and Amari have finally succeeded in bringing magic back to the land of Or&#239;sha. But the ritual was more powerful than they could've imagined, reigniting the powers of not only the maji, but of nobles with magic ancestry, too. Now, Z&#233;lie struggles to unite the maji in an Or&#239;sha where the enemy is just as powerful as they are. But when the monarchy and military unite to keep control of Or&#239;sha, Z&#233;lie must fight to secure Amari's right to the throne and protect the new maji from the monarchy's wrath. With civil war looming on the horizon, Z&#233;lie finds herself at a breaking point: she must discover a way to bring the kingdom together or watch as Or&#239;sha tears itself apart. Children of Virtue and Vengeance is the stunning sequel to Tomi Adeyemi's New York Times- bestselling debut Children of Blood and Bone , the first audiobook in the Legacy of Or&#239;sha trilogy. Praise for Children of Blood and Bone : "[Narrator Bahni Turpin] excels at customizing her voice to capture the unique personalities of each character.... This excellent, refreshing performance of Adeyemi's exciting debut is recommended for all collections where fantasy is popular." - Booklist "Poses thought-provoking questions about race, class and authority that hold up a warning mirror to our sharply divided society." &amp;#8211;The New York Times "Meet Tomi Adeyemi&amp;#8212;the new J.K. Rowling. (Yep, she's that good)." &amp;#8212;Entertainment Weekly