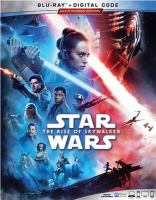 Scheduled release date: March 31, 2020.
The remaining traces of the Resistance movement assemble in their quest to overthrow the First Order, once and for all. Each member of the Resistance must contend with both their own demons and how the events of the past have affected them, learning to overcome their struggles to create a unified front. Meanwhile, the Jedi and the Sith approach their final face-off, bringing centuries of contention to a head. At the heart of it all is Rey (Daisy Ridley), the former orphan who stands as the Resistance's last hope as the galaxy's remaining Jedi knight.