The book of candlelight 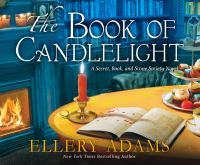 When torrential rains cause a bridge to collapse and a body to appear, it's up to the Secret, Book, and Scone Society to solve the murder before it's too late.