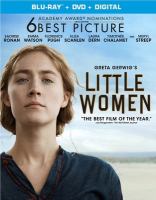 Blu-ray
Scheduled release date: April 7, 2020.
Writer-director Greta Gerwig has crafted a film that draws on both the classic novel and the writings of Louisa May Alcott and unfolds as the author's alter ego, Jo March reflects back and forth on her fictional life. In Gerwig's take, the beloved story of the March sisters, four young women each determined to live life on her own terms, is both timeless and timely.
"[T]his is a film in love with its characters' passions, a rich and effortlessly vibrant examination of the four March "little women" and the ways... they're practically bursting with the innocent it's-happening-right-now joy of being young and alive."--Los Angeles Times.
"A tremendously resonant, sometimes heartbreaking and always entertaining hoot."--USA Today.
"Gerwig has taken a treasured perennial of popular American literature and reshaped it for a new generation, which should give the captivating film a long shelf life."--Hollywood Reporter.
"As one might hope, Gerwig's interpretation does right by the material, sticking to the original period and setting and assembling a dream cast to play the March siblings."--Variety.
"If there were any remaining doubts that Greta Gerwig is a major talent in American cinema, put them to rest now."--Empire Magazine.