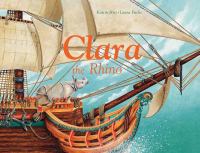 Book
Based on a true story, the book tells of the unlikely relationship between an 18th century sea captain and an orphaned, three-ton rhinoceros. When a baby rhino is orphaned in India with nowhere to go, a gentle sea captain from Holland--Douwe van der Meer--decides to take her to Europe with him. Clara wins the hearts of everyone--from villagers to princes, kings, and queens who have never seen a rhino before. All are delighted by the gentle giant--whose image soon appears on posters, coins, and statuettes, until the fine day when the Dutch Captain gives Clara a home of her own.