A conspiracy of bones 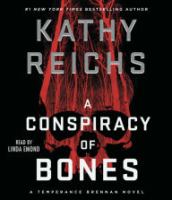 It's sweltering in Charlotte, North Carolina, and Temperance Brennan, still recovering from neurosurgery following an aneurysm, is battling nightmares, migraines, and what she thinks might be hallucinations when she receives a series of mysterious text messages, each containing a new picture of a corpse that is missing its face and hands. An identified corpse soon turns up, only partly answering her questions. To win answers to the others, including the man's identity, she must go rogue, working mostly outside the system. But the clues she discovers are disturbing and confusing. Was the faceless man a spy? A trafficker? And why was he carrying the name of a child missing for almost a decade?