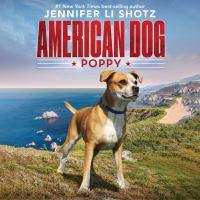 Available as a download from OWWL2go with a valid OWWL borrower card.
From the #1 New York Times best-selling author of Max comes a heartwarming, middle grade story about a misunderstood rescue dog, Poppy, who finds kinship with an outcast girl on the coast of Northern California. Poppy is a dog with a problem. She has too much energy, and her elderly owner can keep her only if she can be trained. When twelve-year-old Hannah moves to the coast of Northern California, she thinks she can help turn this rambunctious puppy into the good dog she knows Poppy is. But Hannah realizes Poppy's reputation as a pit bull means she has to work even harder to prove that Poppy and dogs like her deserve a second chance. Will Hannah train Poppy into the perfect dog before it's too late?