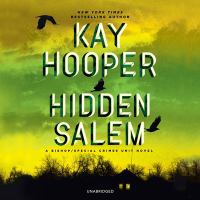 In the eight years since her twenty-first birthday, very odd things have begun to happen to Nellie Cavendish. Crows gather near her wherever she goes, electronics short out when she touches them, and when she's upset, it storms. And the only starting point she has is a mysterious letter from her father, delivered ten years after his death, insisting that she go to a town called Salem and risk her life to stop some unnamed evil, before her twelfth birthday.