The next president : the unexpected beginnings and unwritten future of America's presidents 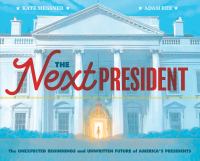