Jack and the beanstalk 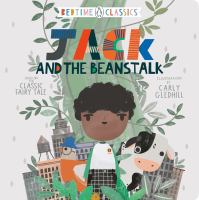 When Jack is sent to market to sell his family's cow, he makes a trade for some magical beans, much to his mother's chagrin. To Jack's surprise, the beans grow into a giant beanstalk. Jack climbs all the way up and encounters a frightening giant. But when the giant is fast asleep, Jack climbs up and steals his treasures.