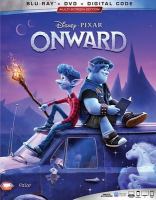 Blu-ray
Two teenage elf brothers set out to spend one last day with their father who died when they were very young.