The Jane Austen Society : a novel 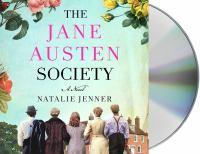 Just after the Second World War, in the small English village of Chawton, an unusual but like-minded group of people band together to attempt something remarkable. One hundred and fifty years ago, Chawton was the final home of Jane Austen, one of England's finest novelists. Now it's home to a few distant relatives and their diminishing estate. With the last bit of Austen's legacy threatened, a group of disparate individuals come together to preserve both Jane Austen's home and her legacy. These people, a laborer, a young widow, the local doctor, and a movie star, among others, could not be more different and yet they are united in their love for the works and words of Austen. As each of them endures their own quiet struggle with loss and trauma, some from the recent war, others from more distant tragedies, they rally together to create the Jane Austen Society.