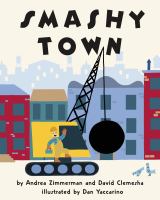 "With a turn of his crane and a swing of his wrecking ball, Mr. Gilly knocks down the old buildings. He smashes through brick and wood. He crashes through stone and glass. Then, with a push from his bulldozer, Mr. Gilly cleans it all up to make room for something brand-new!" -- Amazon.