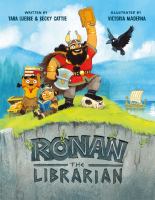 Ronan was a mighty barbarian. He invaded. He raided. And back home, he traded. He always found the greatest treasures. Until one day, Ronan found something no barbarian wants: A BOOK. This humorous picture book from sister duo Tara Luebbe and Becky Cattie and illustrator Victoria Maderna follows Ronan the Barbarian as he grows from being just a rough-and-tumble warrior to a rough-and-tumble warrior who loves books. At first, his fellow barbarians are skeptical of his newfound passion for reading, but in the end, even they aren't immune to the charms of a good book.