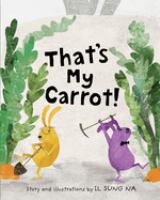 From the acclaimed author-illustrator of A Book of Sleep comes a silly tale about a garden rivalry, a giant carrot and bunnies in construction vehicles! When two rabbits find a giant carrot growing between their yards, they do the only thing that makes sense: they argue over whose carrot it is! One rabbit brings a shovel to dig it out, and the other rabbit brings a spade. Next comes the bulldozers and backhoes and cranes . . . and when the dust settles, the carrot is gone! Now, it will be up to the rabbits to join forces and find the giant carrot, and build a friendship along the way. From beloved creator Il Sung Na comes a story of mischief and one very giant carrot.