If you take away the otter 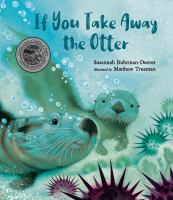 "On the Pacific Coast of North America, sea otters play, dive, and hunt for sea urchins, crabs, abalone, and fish in the lush kelp forests beneath the waves. But there was a time when people hunted the otters almost to extinction. Without sea otters to eat them, an army of hungry sea urchins grew and destroyed entire kelp forests. Fish and other animals that depended on the kelp were lost, too. But when people protected the sea otters with new laws, their numbers began to recover, and so did the kelp forests. Susannah Buhrman-Deever offers a beautifully written account of a trophic cascade, which happens when the removal of a single element affects an entire habitat."--from Amazon.com.