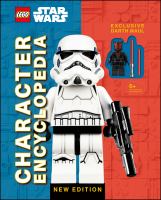 Presents the LEGO action figures based on the "Star Wars" universe, detailing the number of pieces and describing each figure and its variations, when they were made, the playsets in which they appear, and the movie to which they relate.