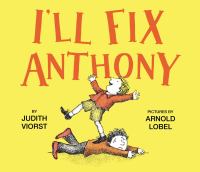 A little brother thinks of the ways he will some day get revenge on his older brother.