Not quite Snow White 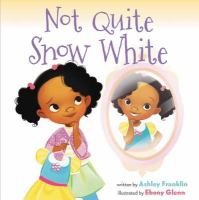 A picture book for magical yet imperfect girls everywhere, written by debut author Ashley Franklin and perfect for fans of such titles as Mary Had a Little Glam by Tammi Sauer and the classic Amazing Grace by Mary Hoffman.Tameika is a girl who belongs on the stage. She loves to act, sing, and dance-and she's pretty good at it, too. So when her school announces their Snow White musical, Tameika auditions for the lead princess role.But the other kids think she's "not quite" right to play the role. They whisper, they snicker, and they glare.Will Tameika let their harsh words be her final curtain callNot Quite Snow White is a delightful and inspiring picture book that highlights the importance of self-confidence while taking an earnest look at what happens when that confidence is shaken or lost. Tameika encourages us all to let our magic shine.