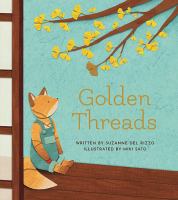 Book
"A beloved toy fox is swept away from his best friend (human girl) Emi and their mountain home. He ends up tattered and alone on a distant shore. Fox is eventually found by a kind old man and given as a gift to his frail granddaughter, Kiko. It is shown, but not necessarily explained, that Kiko has a visual impairment and is recovering from a leg injury. Here in their valley cabin, the fox is lovingly mended with the most exquisite golden thread, and with a little self-love and patience, Kiko and the fox find friendship, happiness and new found resilience. One day Kiko discovers where the fox came from and they set out to bring the fox back. Together Emi, Kiko, and their grandparents piece together the fragments of their beloved, stuffed fox's journey and celebrate the beautiful connection, which brought them all together. An author's note at the end explains how the story was inspired by the Japanese art form of kintsugi (golden joinery) and the ancient philosophy of wabi-sabi (finding beauty in things that are imperfect and incomplete). This book is the perfect antidote to today's political climate and "throw away" epidemic, with its gentle themes of meaningful connection, finding beauty and happiness in the imperfect, kindness, and resilience. "--