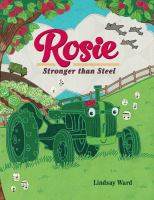 A brave tractor farms for freedom in a story inspired by women who acted with courage and strength in American factories and on British farms during World War II.