You don't want a dragon! 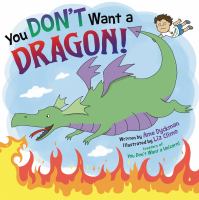 A boy is thrilled to have a dragon of his own, but quickly discovers that dragons are not appropriate pets. "Our protagonist wishes (much to the narrator's continued chagrin) for a pet dragon. Though initially thrilled, the kid quickly discovers that dragons aren't quite as awesome as they originally thought. From the scooting to the digging to the fire-breathing, our Kid is dismayed that they still haven't found their perfect pet. Little do they know, that pet might just be right around the corner..." --