My brother the duck 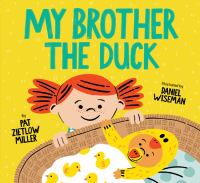 Book
Stella Wells, fledgling scientist, has a new baby brother, Drake, and she is seriously considering the possibility that he is a duck--but further research is required to test that hypothesis.