Can I give you a squish? 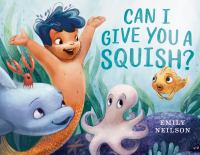 Book
Kai, a merboy, loves to share hugs with his mother, but learns that some friends prefer fin bumps, tail claps, tentacle shakes, or claw pinches.