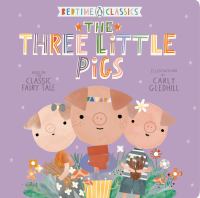 Book
Three little pigs set out to make their fortunes. The first little pig builds a house of straw. When he refuses to let the big bad wolf inside, he blows the house down, and the first little pig flees to his brother's house made of sticks. When both pigs deny the wolf once more, he blows their house down. The two pigs scurry to the brick house their brother built, which, try as he might, the wolf can't seem to blow down, and he leaves the pigs alone once and for all.