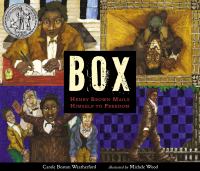 Book
Henry Brown wrote that long before he came to be know as "Box," he "entered the world a slave." He was put to work as a child and passed down from one generation to the next -- as property. When he was an adult, his wife and children were sold away from him out of spite. Henry Brown watched as his family left, bound in chains, headed to the deeper South. What more could be taken from him? But then hope -- and help -- came in the from of the Underground Railroad. Escape! Celebrated poet Carole Boston Weatherford powerfully narrates Henry Brown's story of how he came to ship himself in a box from slavery to freedom.