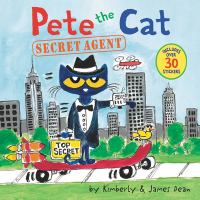 Meet Secret Agent Meow, also known as Pete the Cat, who is on a top secret mission. After some unusual activity, Pete the Cat must go undercover as Secret Agent Meow.  With his handy spy watch, secret catcher, and his meow-mobile, Agent Meow is ready to crack the case! What could the big surprise be?