A is for another rabbit 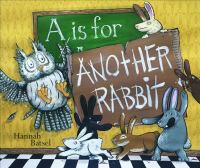 Book
Over the protests of Owl, a narrator introduces an alphabet consisting entirely of rabbits.