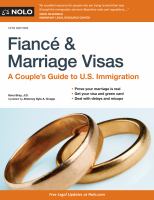 You're engaged or married to a U.S. citizen or permanent resident, and all you want is the right to be together in the United States. Should be simple, right? It's not. The pile of application forms can be overwhelming, the bureaucracy isn't helpful, and delays are inevitable. This book will help you succeed. Discover the fastest and best application strategy. Avoid common--and serious--mistakes. Prepare for meetings with officials. Prove your marriage is real--not a fraud. Deal with the two-year testing period for new marriages. The 10th edition covers the Trump travel ban on citizens of certain countries, changes to fees and application processes, as well as heightened scrutiny for visa fraud. It also provides checklists and sample forms throughout. Use this book if you are living in the United States or overseas and your fiancé is a U.S. citizen, your spouse is a U.S. citizen, or your spouse is a U.S. permanent resident.