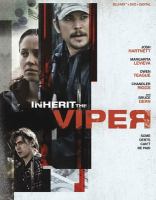 Blu-ray
For siblings Kip and Josie, dealing opioids isn't just their family business, it's their only means of survival. When a deal goes fatally wrong, Kip decides he wants out. But Kip's attempt to escape his family's legacy ignites a powder keg of violence and betrayal, imperiling Kip, Josie, and their younger brother, Boots, in this searing crime-thriller that builds to a shattering conclusion.