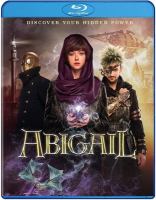 Blu-ray
When townspeople start dying from a mysterious illness, Abigail s town closes itself off from the outside world and takes away everyone infected with the disease, including Abigail s beloved father, to be executed. Ten years later, as she s trying to escape the town s security forces, Abby uncovers a shocking truth - her father may still be alive. Filled with danger and discoveries, Abby sets out on a magical steampunk adventure that overturns everything she once knew about the world, her family and even herself.