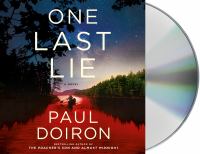 'Never Never trust a man without secrets.' These are the last words retired game warden Charley Stevens speaks to his surrogate son, Warden Investigator Mike Bowditch, before the old man vanishes without explanation into a thousand miles of forest along the Canadian border. Mike suspects his friend's sudden disappearance has to do with an antique badge hat belonged to a warden who was presumed dead fifteen years ago but whose body was never recovered.