The Bad Guys in the dawn of the underlord 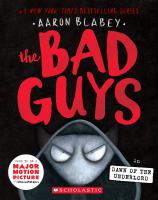 Book
"The Bad Guys have saved the world from butt-handed evil and now it's time to party! But Mr. Snake doesn't feel like partying. Ohhh, no. He's way too powerful for that. Mr. Snake would rather mess with things that could rip open a doorway into a hole new world of horror, mayhem, and blood-curdling badness. Better put your party pants on ice, the Bad Guys are back, baby!!"--Back cover.