The pirates are coming 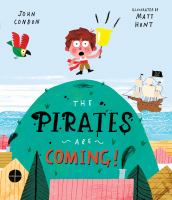 Book
Tom has a very important job: every day he climbs to the top of the hill and watches for pirate ships. When he rings his bell and shouts ́PIRATES!́ a few too many times ́ even though there's no pirate ship ́ the villagers start to get tired of hiding. But what will happen when the pirates really do show up?