Rot, the bravest in the world! 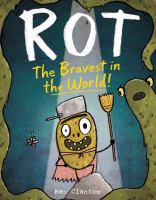 Rot the mutant potato must find a way to face his fear after his big brother, Snot, tells him there may be a dangerous Squirm in the magnificent mud pit he found.