The fabled life of Aesop 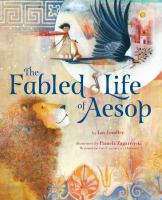 Book
"The Tortoise and the Hare. The Boy Who Cried Wolf. The Fox and the Crow. Each of Aesop's stories has a lesson to tell, but Aesop's life story is perhaps the most inspiring tale of them all. Gracefully revealing the genesis of his tales, this story of Aesop shows how fables not only liberated him from captivity but spread wisdom over a millennium. This is the only children's book biography about him.