What makes a marriage last : 40 celebrated couples share with us the secrets to a happy life 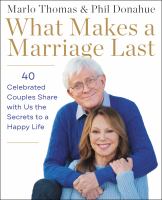