Mario and the hole in the sky : how a chemist saved our planet 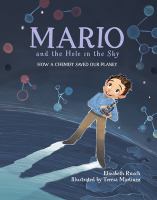 Book
The true story of how Mexican-American scientist Mario Molina helped solve the ozone crisis of the 1980s and went on to become a Nobel laureate and a recipient of the Presidential Medal of Freedom. His inspiring story gives hope in the fight against global warming. Full color.