All the way to the top : how one girl's fight for Americans with disabilities changed everything 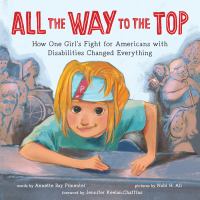 Book
"Diagnosed with cerebral palsy at birth, Jennifer Keelan grew up battling-and overcoming-the limitations others set for her. From a lack of cutaway curbs and bus lifts to being denied enrollment at her neighborhood school, Jennifer was continually blocked from living the life she wanted. But after discovering the world of disability rights activism, she knew she had to use her voice to change things. When Jennifer was just eight years old, she participated in the Capitol Crawl. The deeply affecting image of Jennifer crawling up the steps of Capitol Hill went viral and helped pressure Congress into passing the Americans with Disabilities Act. A powerfully illustrated biography of Jennifer's life and a celebration of youth activism, All the Way to the Top will teach all children that they have the power to make a difference"--