Thirteen doorways, wolves behind them all 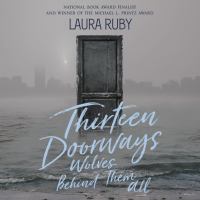 Available as a download from OWWL2go with a valid OWWL borrower card.
National Book Award 2019 Longlist Nominee! From the author of Printz Medal winner Bone Gap comes the unforgettable story of two young women&amp;#8212;one living, one dead&amp;#8212;dealing with loss, desire, and the fragility of the American dream during WWII. When Frankie's mother died and her father left her and her siblings at an orphanage in Chicago, it was supposed to be only temporary&amp;#8212;just long enough for him to get back on his feet and be able to provide for them once again. That's why Frankie's not prepared for the day that he arrives for his weekend visit with a new woman on his arm and out-of-state train tickets in his pocket. Now Frankie and her sister, Toni, are abandoned alongside so many other orphans&amp;#8212;two young, unwanted women doing everything they can to survive. And as the embers of the Great Depression are kindled into the fires of World War II, and the shadows of injustice, poverty, and death walk the streets in broad daylight, it will be up to Frankie to find something worth holding on to in the ruins of this shattered America&amp;#8212;every minute of every day spent wondering if the life she's able to carve out will be enough. I will admit I do not know the answer. But I will be watching, waiting to find out. That's what ghosts do.